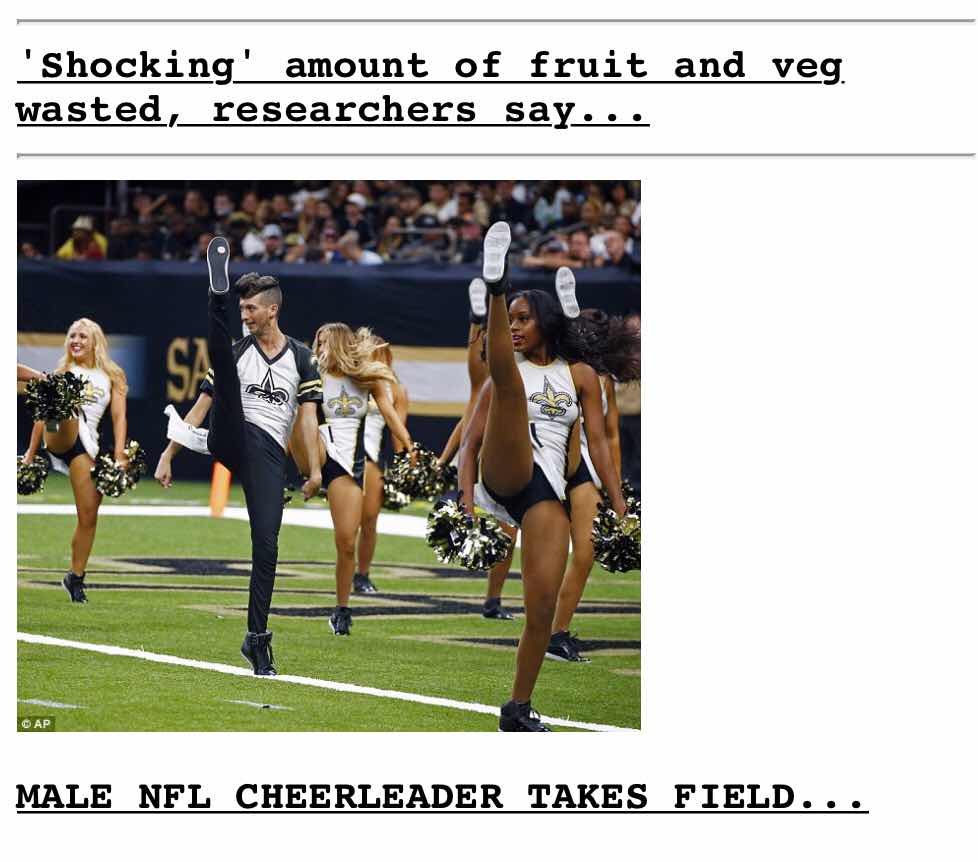 he does look like a complete idiot. i'd care if i still watched the nfl.

Yet another reason to not watch.

^ I think all the 'cheerleaders' at a pro football game look like idiots.
This isn't high school football with 2,000 people watching kids play a game.
The pro game is hundreds of dollars/ticket, sitting in a mob of 50,000-80,000 people, watching millionaires beat each other up. Who in the stadium gives a damn about a bunch of underdressed women with pushup boobs airing out their coochies, hoping to catch the eye of a Harvey Weinstein who will make them famous?
Lt. Col. Gen. Tailgunner dick

Does he dress in a separate locker room, or does he identify as a female?

Too bad I can't boycott the NFL since I gave up on pro football when the Colts left Baltimore in the dead of night and on college football when my alma mater, Princeton, dropped the single wing.

N.B. Johnny U stayed loyal to Baltimore and his number is retired there.

Yep, that's gonna bring'ed back to the old Flat Screen..........
Hey NFL… Do you really want to piss off men who drink beer,
drive pickup trucks, require heart medications and at times have
erectile dysfunction? In marketing that’s your target audience.
You know the ones who buy shit from your major advertisers.

How much lower can we go?

For true gender equity, he needs to be in a skirt...I'm certain he has several.

What if the marching band refused to yield?

I'm still waiting for the Cardinals to apologize and slink back to Saint Louis. In my opinion, the NFL sucks, most NFL players should be indicted, and NFL cheerleaders are women who flunked out of pole dancer school.

I have better things to do with my Sundays.

Actually I think the cheerleaders now have more fans than the players do . If the NFL starts putting in those "guys" the may find their audience dropping even more.