A bunch of dicks 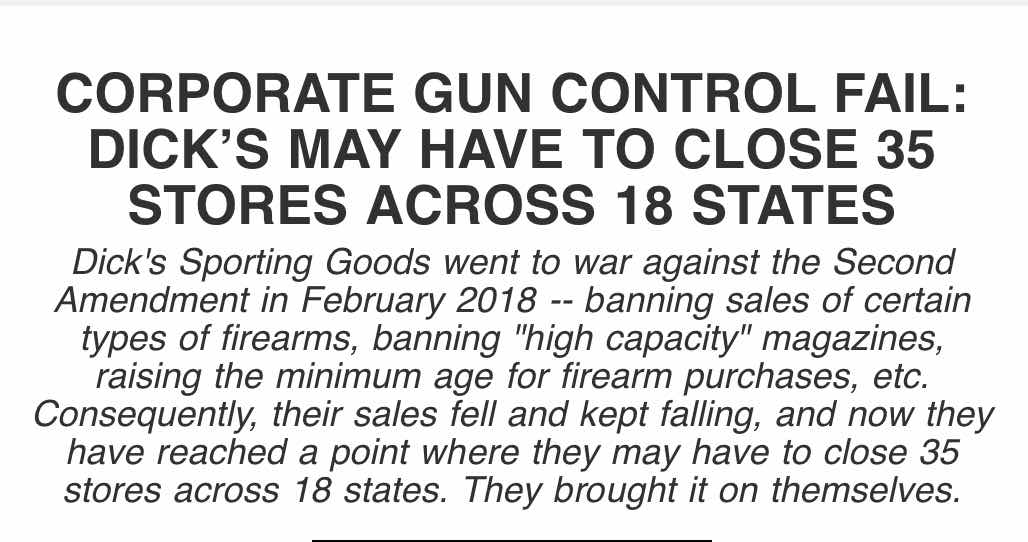 Take that “kneelers” so predictable.

Never in the history of corporate branding has a name been more appropriate.

So the bosses made the decision to be oh, so much better than the rest of us. Sales are tanking, but bosses continue to run head-long into the wall while sales drop more and more. So now they're deciding whether to close stores and put working folks who had absolutely nothing to do with this stupidity out of their jobs.

Do you suppose the decision makers will get pink-slipped or golden-parachuted?

Let them rot. Dick's has been a semi-rural chain for many years, only moving into the major suburban areas within the last decade. Hunters and real outdoorsmen have been their bread and butter forever. They're wrong if they think they can now get the designer flannel wearing bearded urban millennial lumberjack pretenders as their customers, because those folks are far too upscale to shop at such a low class store.

It will be a little sad if they go under, as they've been one of the anchor stores in shopping centers for ages. Usually they pair with the Giant supermarket chain as the other anchor. It's always been a bit of juvenile fun for me to drive by and see the big mall sign out by the road that says Giant Dick's.

I am a diehard conservative who never fell in with the "we are doomed crowd."
It is my belief that politics (just like economics) are complex dynamics.
When the pendulum swings too far in one direction, the American people will
eventually push it back in the other direction. This is especially true when
it comes to the culture wars. The best actors and entertainers are the ones
who never engage in politics. When someone asked Michael Jordan to comment
on some hot-button political issue, he said he had no comment because
Republicans buy tennis shoes too.

The same is true for corporate entities. What happened to the Dixie Chicks
is also happening to Dicks Sporting Goods, the National Felon's League, and
now the Boy Scouts. Sears/Target was already in deep financial trouble but
Target lost about two billion dollars in a week or two following their ill-fated
tranny bathroom policy. Even ESPN was lamenting their decision to inject
politics in their sports broadcasts.

On the other hand, In-N-Out Burgers, Chick-Fil-A, and Hobby have been targeted by
the radical left because of their Christianity. All three entities are apolitical
and their only crime was having Christian founders. Every time the left calls
for a boycott of these three companies their business grows. The average
American votes with their pocketbooks on both sides of this issue. As William
F Buckley put it, "A conservative is someone who stands athwart history, yelling
Stop, at a time when no one is inclined to do so, or to have much patience with
those who so urge it."

You might even say that the election of Donald Trump was a voter rebellion driven
by people who were fed up with the excessive nature of the modern left.

I wouldn't run into a burning Target to save babies.
The Frogs that own them did away with their 'Toys For Tots' program because it was a volunteer gathering of The United States Marine Corp.
Big Corporation Snail Eaters said they wanted nothing to do with war.


I give you Dick on Dicks

They'll close down stores and then give themselves bonuses for all the money they are saving by cutting employees lose , selling stores , reducing inventory taxation , and store upkeep.