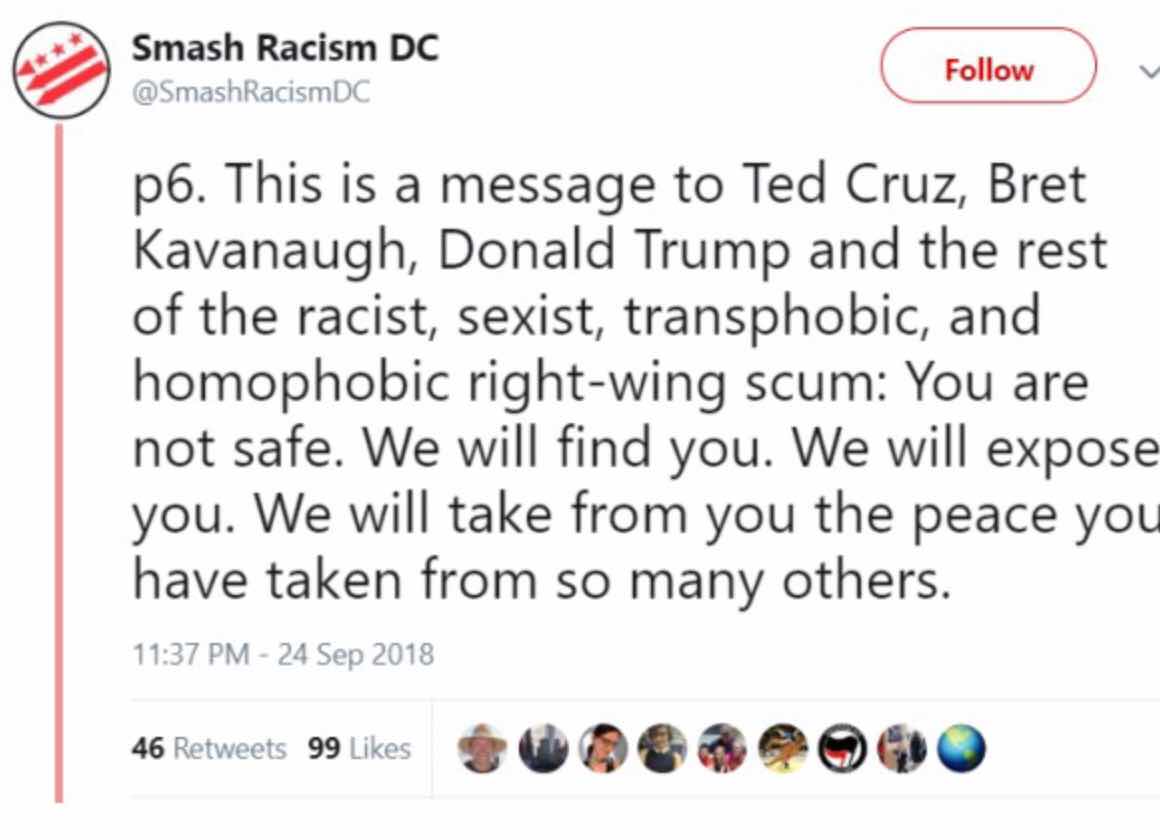 Translation: We're against Hate - well, except for the people who Deserve our Hate. And, anyone who won't sufficiently condemn them. And, those who fail to join the villagers with the torches and masks.

Never more is classic futuristic fiction needed in schools - 1984, Brave New World, Animal Farm - along with teachers who will not twist them into a How-To manual.

You don't see many confrontations like this in Nevada. I am in Las Vegas, a CCW YES state. Washington DC is a CCW NO state. Confronted by several communists I an place my pistol on the table in front of me, declare I'm armed, and that I will defend myself.

As for the restaurant Ted Cruz was attacked at yesterday, he was in a CCW NO location, a mistake especially when there are plenty of restaurants in nearby Northern Virginia. Something Cruz ought to assume is that someone who works at the restaurant he was at passed word of his reservation to the communist group. Cruz could confront the owner, or he could just never go there again. After telling the owner of his suspicion.

The keep saying those words. I do not think they understand their meaning.

THE WRATH OF THE AWAKENED SAXON
by Rudyard Kipling

It was not part of their blood,
It came to them very late,
With long arrears to make good,
When the Saxon began to hate.

They were not easily moved,
They were icy -- willing to wait
Till every count should be proved,
Ere the Saxon began to hate.

Their voices were even and low.
Their eyes were level and straight.
There was neither sign nor show
When the Saxon began to hate.

It was not preached to the crowd.
It was not taught by the state.
No man spoke it aloud
When the Saxon began to hate.

It was not suddenly bred.
It will not swiftly abate.
Through the chilled years ahead,
When Time shall count from the date
That the Saxon began to hate.

I have the feeling Trump is going to drop a big one for the Thursday confirmation.

In my radical days, I hung out with members of the Maoist Progressive Labor
Party. Smash racism was one of their slogans. Now, Smash Racism is an
offshoot of the PLP. The PLP split from the Soviet Marxist/Leninist camp
because of Kruchev's denunciation of Stalin. You might say that the PLP
believes that Stalin was too warm and fuzzy for them so they latched onto
to single greatest mass murderer in history.

Make no mistake about it, Smash Racism and its parent the PLP are hard-core
radical communist revolutionaries. They are more pragmatic than Antifa,
but when the time is right they will be in the streets right alongside them.

Tell us again, please, because we keep forgetting: Why are right-wing death squads such a bad idea?

Ttell that plick to just suck your nostril. You dems are worthless POSes. And you are going to wither and die just like the wicked witch of the north. You and all your meth and crack and pot followers.

Just be sure to bring an army with you.