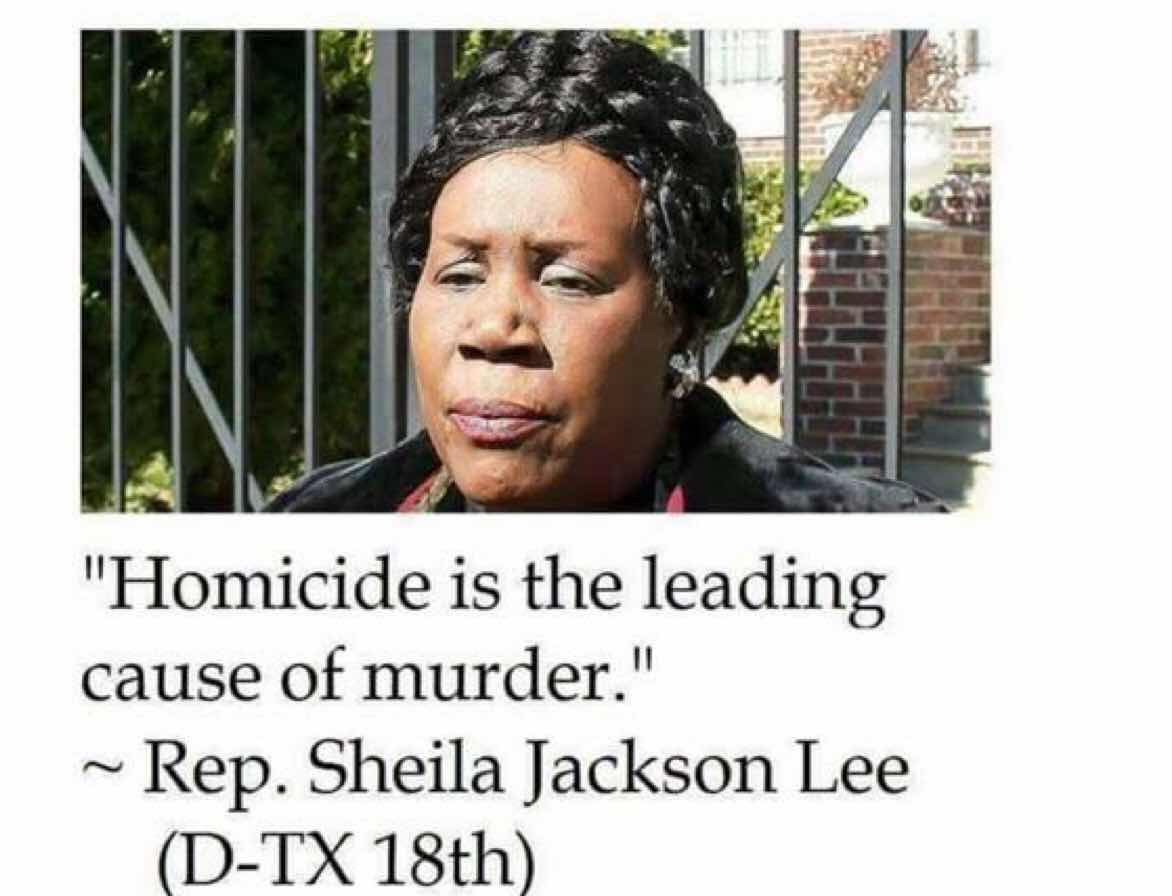 I am at a loss for words when faced with this level of stupid.

Her district is directly south of mine. Check out her district and ask yourself if it's been gerrymandered to guarantee her a seat in Congress.

Gary, it was probably gerrymandered to consolidate all the idiots who'd vote for her. It keeps them concentrated in one area.

I seem to remember a reverse Gerrymander when a district got redrawn because it didn't have enough diversity to satisfy .

Hey! What’s all the complaining about?

At least she’s not following the party line and claiming: “It’s the guns! That’s why there’s so many murders! The guns cause it!”

The gift that keeps on giving!

She's picking up where Yogi Berra left off.

Anywhere else but America, she would be a domestic; or maybe a doorstop.
We are truly blessed.

Sadly, she is just one of many. DEms are rife with pure idiots ... all of whom are filthy rich. Ahem.

My state, NC, has historically gerrymandered to ensure black House members, but now the Republicans have controlled both NC State Houses and the districts look less insane in terms of fantastic shapes.

But we still seem to have isolated the crazy people into three of the 13 districts. The 3 D-districts average D +17.3. The 10 R-districts average R +9.5. So there is some slight gerrymandering going on, but not pro-black, but pro-Rep.

I think every sane person would agree that Chapel Hill needs to have its own district. NC-4 is the CH district and it is D +17. As the immortal Jesse Helms said "Why do we need a zoo in NC? Why not just put up a fence around Chapel Hill?"

Steve (above) brings up an interesting point RE: gerrymandering.

So far, all gerrymandering has been done to improve the standing of one particular party, at the expense of the "other" party, whichever that may be, and, as he points out, that's resulted in some "fantastic shapes." I'm reminded of Coreen Brown's (sp?) all-dem district in FL that was ~160 miles long and only 4 miles wide in spots.

What about negative gerrymandering, intended to contain socially and economically worthless areas and keep them in the hands of Ms. Lee and her cohorts? Grant lifetime re-election to the thoroughly corrupt and stunningly incompetent (Lee, Hank Johnson, Maxine Waters, et al) and enshrine them forever in their own small and ineffective group and restructure all other districts to improve competition among candidates (I'll concede that the fact of Johnson's, Lee's, Waters' and Brown's perpetual re-election - right until Brown surfaced in court charged with various financial felonies - may be evidence of that existing already, as is Pelosi's Perpetual Presence in Congress, but if it's ever been seriously tackled nationally I'm unaware of it. Perhaps some clever (and deceitful) pro-American entrepreneurs could procure Soros- or Steyr-style funding for the effort).

i have a twin sister living south of charlotte. she is a rabid raving libtard and proud of it. i guarantee it is her self loathing and long term feeling of guilt for her behavior as a "young adult"(i use the word adult advisedly) that has caused it. i often wonder if this is not so for many democrats

Sigh ... our family is similarly rifted.