All laws which are repugnant... 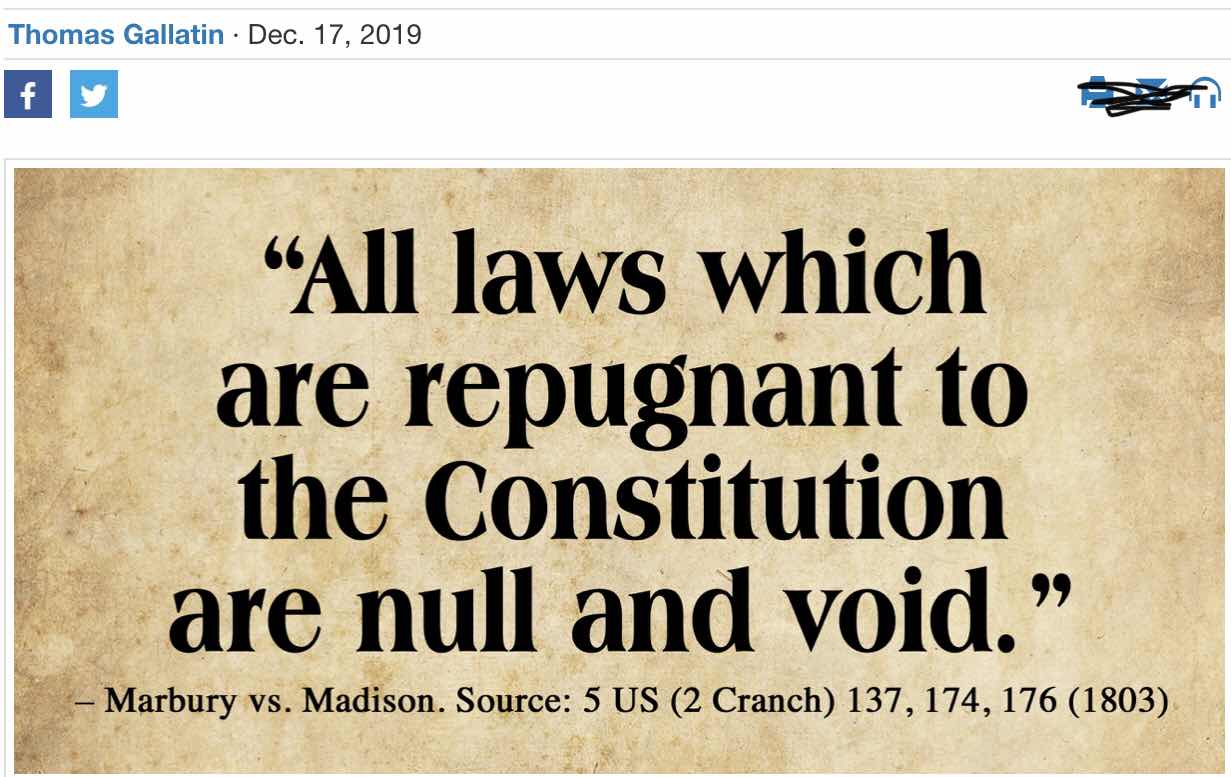 Following the Democrat Party’s narrow takeover of both houses of Virginia’s General Assembly this past November, those majorities are teaming up with Democrat Gov. Ralph Northam to undercut the commonwealth’s historically staunch pro-Second Amendment status. In response, thousands of patriotic Virginians have risen up in defense of their constitutionally protected rights to challenge the Democrats’ planned gun-grabbing agenda by declaring their communities Second Amendment Sanctuaries. Thus far, 75 of Virginia’s 95 counties and 18 of the commonwealth’s legally independent cities have enacted Second Amendment Sanctuary policies.

However, the fight is far from over, as Democrats have begun issuing threats against their fellow Virginians should they refuse to comply with Northam’s proposed draconian gun-grabbing legislation (SB 16). “I’m not the governor, but the governor may have to [mobilize] the National Guard to enforce the law,” warned Democrat state Rep. Donald McEachin. “That’s his call, because I don’t know how serious these counties are and how severe the violations of law will be. But that’s obviously an option he has.”

Virginia’s National Guard was quick to respond, “We understand and respect the passion people feel for the U.S. Constitution and 2nd Amendment rights. We will not speculate about the possible use of the Virginia National Guard.” In other words, Keep us out of this.

McEachin also threatened to withhold tax revenue from 2A sanctuary counties. “They certainly risk funding,” he warned. “If the sheriff’s department is not going to enforce the law, they’re going to lose money. The counties’ attorneys offices are not going to have the money to prosecute because their prosecutions are going to go down.”

While McEachin alone is not in a position to back up his threats, Democrats in the General Assembly have in fact taken action with a bill clearly aimed at compelling law enforcement into enforcing whatever anti-2A legislation they may pass. The recently introduced HB 67 would terminate the employment of any law-enforcement officer who refuses to enforce a state law, irrespective of the local government’s position. Democrat Rep. Gerry Connolly explained, “I would hope they either resign in good conscience because they cannot uphold the law which they are sworn to uphold, or they’re prosecuted for failure to fulfill their oath. The law is the law. If that becomes the law, you don’t have a choice — not if you’re a sworn officer of the law.”

Northam has attempted to prevent the growth of the 2A sanctuary movement by offering to insert a “grandfather clause” into SB 16 exempting currently owned “assault weapons” from the legislation’s ban on possession of AR-15s and many other firearms, but many Virginians aren’t buying it. “Any erosion of our constitutional rights is just the beginning,” one Virginia resident argued. “This is just the tip of the iceberg on what they ultimately want, which is complete gun confiscation across the whole United States. These United States were founded with firearms. All the other rights we have are only guaranteed because of this right.” Well said.

Withhold tax revenue? What if you don't get the revenue in the first place bubba? You won't have the revenue to withhold, will ya? Who do you think is gonna be hurt more if it comes to that?

In what alternate universe do you or your minions think that threatening law enforcement officers with "consequences" is a good idea?

Election day is less than eleven months away. Some of those same LEO's you're threatening voted Democrat in 2018 (though, for the life of me, I can't imagine why.) Do you think, if you follow through with terminating any of them as a result of your anti-Second Amendment hissy-fit, that this is a voter block you can afford to piss off? Can you, or any of the recently elected Democrats who have formed the current (although temporary) majority that passed this foolishness, afford to alienate the men and women who will lose their jobs for supporting the Constitution of the United States?

In your short-sighted attempt to please the Soros's and Bloomberg's of the world, you seem to have lost sight that your re-election and the re-election of your Democrat associates, depends entirely on whether or not the electorate is happy with your previous accomplishments.

You and your cronies can bluster all you want, but the reality is, when 75 of 95 counties are against you, the coming election is already lost.

Toad:
I wonder if they will send in the ANTIFA fan boys to try to intimidate and/or take firearms away from private individuals . Will we see the militia break out crew served weapons ?

Sooooo... are they also in favor of enforcing the law when it comes to all the sanctuary cities and states for illegal aliens??

Trying to curb or limit the rights granted in the Bill of Rights is a federal offensse, without a time limit and which does not recognize individuals acting as agents of the state but holds them individually liable under the 14th amendment. So if the Marxists want to abridge our rights they are violation of federal law and Trump should initiate appropriate action against each of these gun grabbers.