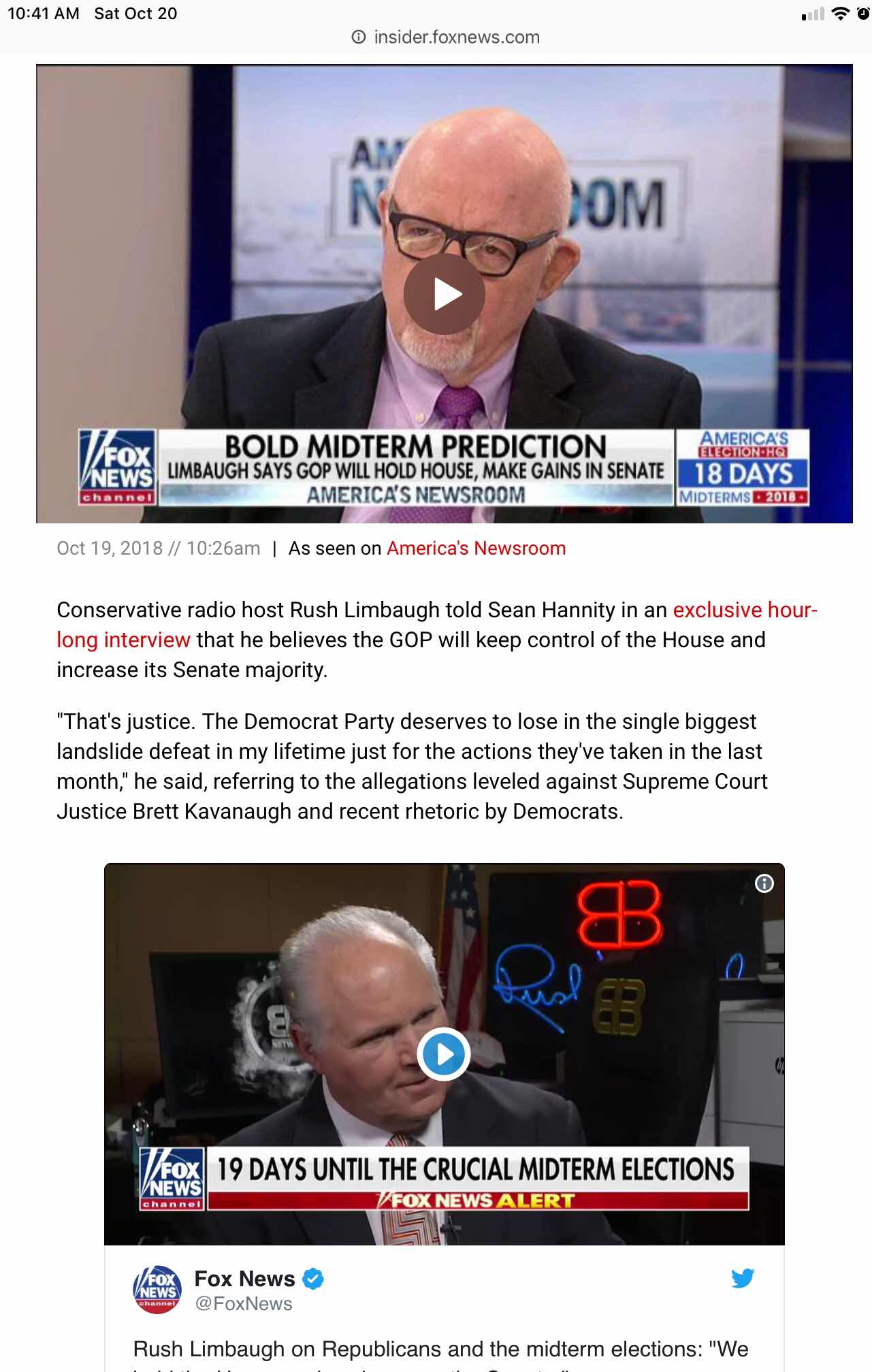 I saw it and hope it is true. Rollins didn't think so, and he is an expert at deciphering race trends. On the other hand, Rush has the macro idea. The Commsimps have been shooting themselves in the foot these days, with Kavanaugh, Warren, and the caravan.

On the caravan, I would like Trump to be aggressive on Guatemala with denuding them of funding if they fail to retrieve the caravan. Bring in US military to keep them from the border. IF they keep going, Mexico should be warned. If they get closer to the border don't just guard the border. Launch a war on Mexico with knocking out Mexico's air capability and carpet bomb Mexico's government in Mexico City. Occupy Mexico City and attack Mexican military in Northern Mexico and attack cartels as well. They have been invading the US for years and it's time to stop it.

I'll bet the Dems would drool at that scenario, but in my opinion, even before the election, most Americans would love it. And best of all, we can us Guatemala's money and Mexico's oil to finance the wall.

For many decades the "media" could say anything it wanted in support of the "progs" . Now the rumor is internal polling showing the majority of people in flyover country not only doesn't trust the MSM they actually hate them.

Okay skoonj, you are in command. And I want Marshall law for cally

Raja, you know they earned it.

"And I want Marshall law for cally."

I'm sorry, Skoonj, but you lost me when you said that we should "occupy Mexico City".

I'm as conservative as they come, and although I've since changed my mind, I supported the purposes of going into Iraq and doing what was necessary to remove Saddam. Baghdad has a population of 8.7 million, and pacifying it was a nightmare.

If you put every single person the U.S. has in uniform into Greater Mexico City, the Mexicans would outnumber our forces by 10:1.

I'm ok with venting and an occasional rant, but there won't be any support for putting our military against Mexico.

Good God anonymous, I didn't think anyone could construct an occupation of population. That would be a mission only a liberal could love. Occupy government locations, like their presidential palace, legislature, military installations and so on. Like we did during WW2. Like the Brits did in WW2. And the Germans. You don't have to hold down a population, just key locations. We used to do it regularly.

Yeah, I get it: When you decide that it is in your country's best interests to put your military into another country, you don't have to take control of every single building and every single person. You take key parts of their infrastructure....government buildings, military, communications, etc. On that part we agree.

However, you've failed to convince me that moving our military into Mexico is in our nation's best interests. I get it that our border is out-of-control. I live in Arizona and would like to plug the leaks. Personally, I wouldn't put up a wall.....I think a wall on our southern border will end up to be a fiscal white elephant, much like the Berlin Wall was to the Warsaw Pact. If I could wave a magic wand and do something about illegal immigration, I'd get rid of the things that these immigrants seek: Welfare of all types. Social Security, indigent medical care insurance, taxpayer-paid schooling....all of it. But I recognize that these welfare programs are enjoyed by most Americans and ending them is a pipe dream. Few will be willing to give up these programs until these social programs bankrupt the country.

By the way, who do you think will lead this cry to invade Mexico? Trump? I don't think so. It would be an extreme move on his part, and would create a whole new level of controversy, but he may put troops on the border, but none of them will cross.

Mexico City? Give me a break. We've honed our drone warfare to the point we could virtually eliminate the cartels. In fact, with all of the death they're sending our way in the form of various drugs as well as murdering Americans on our own soil, I wonder why we haven't done so.