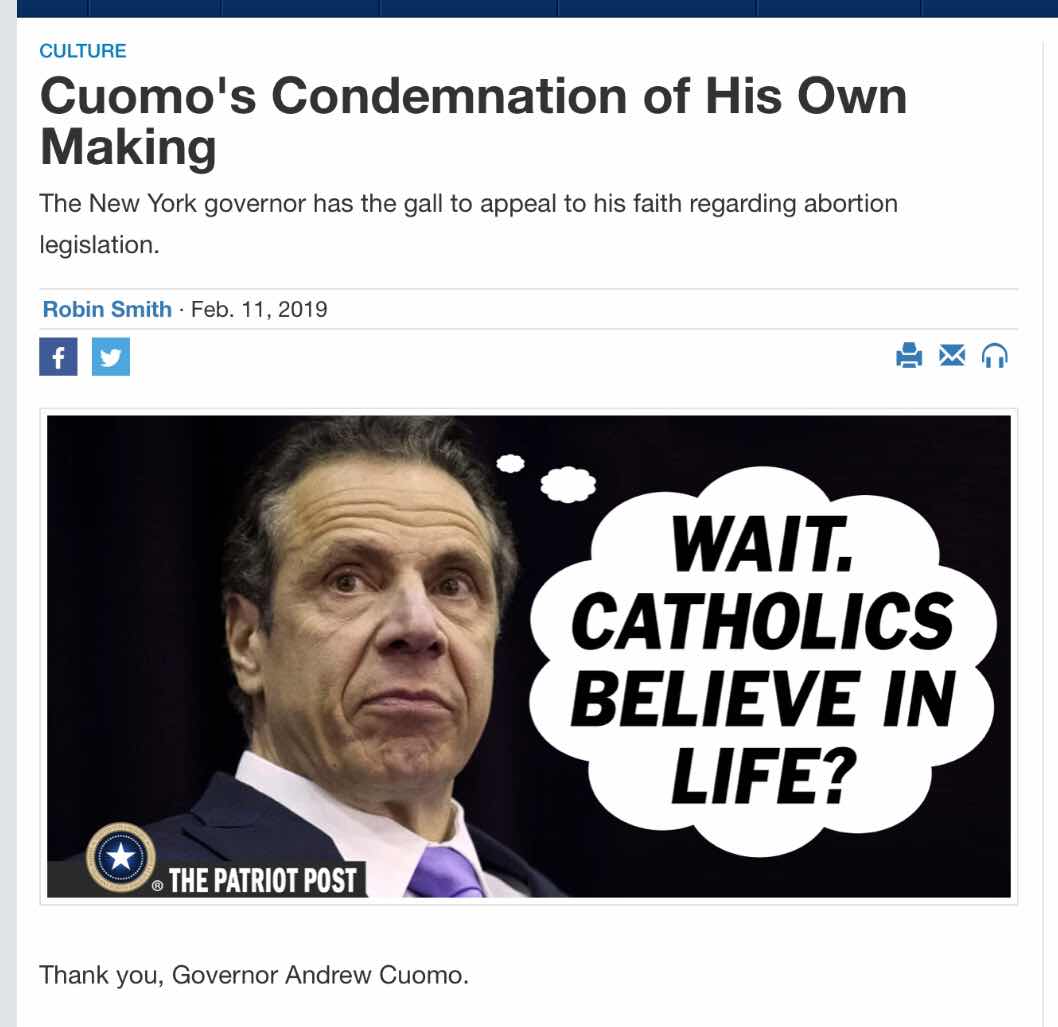 .Last week, Cuomo penned an op-ed in The New York Times that hit back against criticisms linking those who find New York’s Right to Murder law, along with the evil spoken of in Virginia, to President Donald Trump in an attempt to provide political cover and distraction. Such classic Saul Alinsky-style politics on display, using ridicule and tying opponents to a target that’s been effectively polarized, should serve to remind folks that Cuomo is speaking politically, not out of concern to defend his Christian faith.

Cuomo asserts that his critics, including Cardinal Timothy Dolan and the Catholic Church, are part of Trump’s allies and the Religious Right “spreading falsehoods to inflame” the debate. Um, no. When science demonstrates babies are viable outside the mother’s womb as early as 22 weeks and that the health of the mother is almost never at risk in the third trimester of gestation, the lies aren’t coming from the critics. Your argument is not only with God, but also science.(FULL)

Since libs are opposed to execution but for late term abortions. Instead of calling these executions how about 300th trimester abortions?
Francois

Been thinking lately; although the Left's policies and actions offend me (As a conservative, am I allowed to use that word?), what pisses me off the most is their near 100% hypocrisy, where it's do as I say, not as I do and wanting to have their cake and eat it too.
Cuomo claims to be Catholic - he should be excommunicated along with every other Catholic who believes abortion is a right and not murder.

Although I might not like whatever cause a zealot with a hairshirt espouses, I can respect him if he lives what he preaches.
OTOH, Dems and Leftists almost never do; they are the modern day Stalinists and Commies, living high on the hog with state-provided luxuries and dachas by the sea, while they implore the proles to sacrifice and make do with no meat weeks and buying toilet paper on the black market.
Gawd I despise them.
Lt. Col. Gen. Tailgunner dick

"and make do with no meat weeks"

Not a problem here in Oregon, where harvesting road kill is legal. You can get easily 30 pounds of usable meat from a deer - and it's fork-tender along the tread-marks.

After spending my formative years in Catholic school, after daily lessons from the old blue-cover Baltimore Catechism, after over sixty years on now, knowing that there is a vengeful God, I would not want to be standing too close to the likes of a Cuomo or Northam or even Pelosi when the lightening bolts begin to fly.

" He has more excuses than a pregnant nun . "